Besides writing, my other favourite activity is reading. Nothing like sitting back at the end of a day and winding down with a book.

I am loving eBooks (via Kindle). They are lightweight and easy to carry around, and the screen isn’t glaring at all. I am also a recent convert to audiobooks: who knew that you could get so much reading done while cooking, doing groceries, cleaning, and driving?

I thought that I’d talk about books that I’ve read so far this year. Sort of a mid-year round-up. (There’s no way that I’d wait until the end of the year!)

In the future, I hope to post more in-depth reviews of individual books as I finish reading them, or maybe I will do monthly round-ups. What do you guys think?

In our ordinary, non-fantastical world, there is one London. In V. E. Schwab’s magical dystopian world, there are three Londons that exist in parallel universes: Red, Grey, White. And then there is Black London, which no longer exists.

Kell is one of the rare beings who are capable of traversing between these universes. By day, Kell is an ambassador of Red London, delivering letters and forging ties between the different Londons. By night, Kell smuggles trinkets from one London to another, selling them to curious and fanatic people. One day, in accepting a parcel from a mysterious stranger, Kell bites off more than he can chew.

How can I leave out Lila? Delilah Bard resides in Grey London, where she makes a living picking pockets and moving from one street corner to the next. Lila steals an intriguing object from Kell and is swept into his magical world.

I was hooked from page one. V. E. Schwab is amazing at creating strong and magnetic characters that stay in your head long after the book is read. I am also intrigued by the world that she has created for her readers, which is so believably magical. Dialogues are fast, snappy and often humorous. This series was a fast and smooth read for me – as if pages were flipping themselves. I would definitely recommend it for any fantasy-lovers out there.

This Savage Song (Monsters of Verity #1) by V. E. Schwab 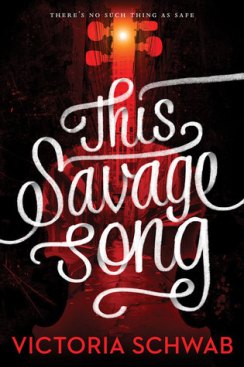 Kate Harker and August Flynn’s families rule opposite ends of Verity, a grisly metropolis where violent acts summon real monsters: bloodsucking Malchai; clawing Corsai; and soul-stealing Sunai. The truce that keeps the families at peace is crumbling, and August is sent to spy on Kate. But when Harker’s men try to kill her and pin it on the Flynns, August and Kate find themselves running from both sides, in a city where monsters are real…

A star-crossed romance in disguise. I can’t help but love this book by V. E. Schwab as well. It is fast-paced and a page-turner. The characters are relatable: Kate, who is a independent and strong-willed human, and August, who is a soft-hearted monster who would rather be a human. You can’t help but feel the chemistry between the two. It is an amazing read for those who are fans of V. E. Schwab.

Rafe is a normal teenager from Boulder, Colorado. He plays soccer. He’s won skiing prizes. He likes to write.

And, oh yeah, he’s gay. He’s been out since 8th grade, and he isn’t teased, and he goes to other high schools and talks about tolerance and stuff. And while that’s important, all Rafe really wants is to just be a regular guy. Not that GAY guy. To have it be a part of who he is, but not the headline, every single time.

So when he transfers to an all-boys’ boarding school in New England, he decides to keep his sexuality a secret — not so much going back in the closet as starting over with a clean slate. But then he sees a classmate break down. He meets a teacher who challenges him to write his story. And most of all, he falls in love with Ben . . . who doesn’t even know that love is possible.

This witty, smart, coming-out-again story will appeal to gay and straight kids alike as they watch Rafe navigate feeling different, fitting in, and what it means to be himself.

This was a fun and fast read for me. The author did a good job in making Rafe a relatable character, even for those who are not gay. I believe that we can all relate to the process of coming out, in one way or another. When was the last time you had to share something about yourself, that you weren’t comfortable with how it will be received by others? The author is able to put us in Rafe’s shoes, no matter our gender and sexual identity. 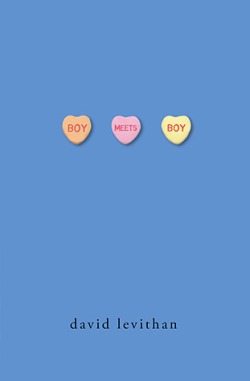 This is the story of Paul, a sophomore at a high school like no other: The cheerleaders ride Harleys, the homecoming queen used to be a guy named Daryl (she now prefers Infinite Darlene and is also the star quarterback), and the gay-straight alliance was formed to help the straight kids learn how to dance.

When Paul meets Noah, he thinks he’s found the one his heart is made for. Until he blows it. The school bookie says the odds are 12-to-1 against him getting Noah back, but Paul’s not giving up without playing his love really loud. His best friend Joni might be drifting away, his other best friend Tony might be dealing with ultra-religious parents, and his ex-boyfriend Kyle might not be going away anytime soon, but sometimes everything needs to fall apart before it can really fit together right.

This is a happy-meaningful romantic comedy about finding love, losing love, and doing what it takes to get love back in a crazy-wonderful world.

David Levithan has a humorous and whimsical writing style, which pulled me in right away. One unique aspect of this book is the setting – not just an ordinary high school, but one where people who are LGBT are not only tolerated, but embraced. This is impressive given that this book was published in 2005, which I am assuming would be a less progressive time (but correct me if I am wrong). I appreciate and admire that the author can create an ideal world in his mind, and then recreate it for us in writing.

Damen is a warrior hero to his people, and the rightful heir to the throne of Akielos. But when his half brother seizes power, Damen is captured, stripped of his identity, and sent to serve the prince of an enemy nation as a pleasure slave.

Beautiful, manipulative, and deadly, his new master, Prince Laurent, epitomizes the worst of the court at Vere. But in the lethal political web of the Veretian court, nothing is as it seems, and when Damen finds himself caught up in a play for the throne, he must work together with Laurent to survive and save his country.

For Damen, there is just one rule: never, ever reveal his true identity. Because the one man Damen needs is the one man who has more reason to hate him than anyone else…

Some say that the back-cover synopsis of this series is mis-leading – it is indeed! I know what we are all thinking when we read up to the “pleasure slave” part…

But that shouldn’t deter you from this series. It’s a fantasy, a political thriller and a love story all rolled into one. The plot – and yes, there is an amazing plot – is intricately woven and keeps you on the edge of your seat. The sexual tension between the characters is palpable. The sharp dialogue is one of the highlights of this series. And yes, there is gay sex in this novel (in case that is not your cup of tea.)

If you are a fan of fantasy and LGBT fiction, enjoy fast-paced and well-crafted plots, and are looking for a love story that will make you laugh and cry, this will be a delightful read. 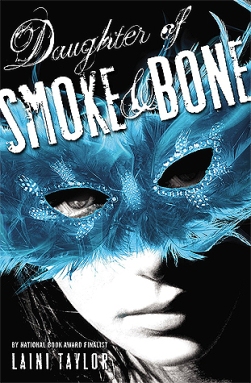 Around the world, black hand prints are appearing on doorways, scorched there by winged strangers who have crept through a slit in the sky. In a dark and dusty shop, a devil’s supply of human teeth grows dangerously low. And in the tangled lanes of Prague, a young art student is about to be caught up in a brutal otherworldly war.

Meet Karou. She fills her sketchbooks with monsters that may or may not be real, she’s prone to disappearing on mysterious “errands”, she speaks many languages – not all of them human – and her bright blue hair actually grows out of her head that color. Who is she? That is the question that haunts her, and she’s about to find out.

When beautiful, haunted Akiva fixes fiery eyes on her in an alley in Marrakesh, the result is blood and starlight, secrets unveiled, and a star-crossed love whose roots drink deep of a violent past. But will Karou live to regret learning the truth about herself?

I enjoy the beautifully crafted world in the Daughter of Smoke and Bone. The book begins with an air of intrigue and mystery, which keeps you reading. However, there are aspects of this book that I am not as fond of: The characters strike as a bit hollow for me (perhaps they are too sparkly and beautiful). There is a great deal of flashbacks, which I feel interrupts the flow of the story. And the book ends on an abrupt note – I was surprised to turn the page and come to the “Acknowledgement” section.

I am aware that this is a popular book, with many great reviews on Goodreads and many, many sales. I am sure that some people will enjoy this book very much. But it’s not my cup of tea.

And that’s all! For now.

I will make a second post about non-fiction books. What books have you read in 2017? What books are you planning to read?